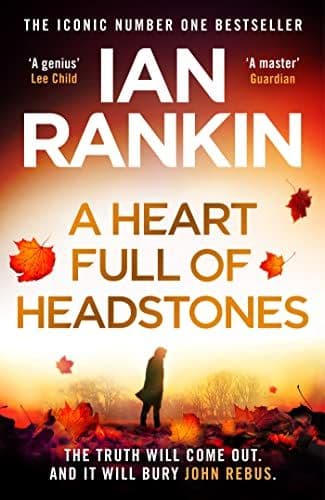 A HEART FULL OF HEADSTONES
by Ian Rankin

THE BRAND NEW REBUS THRILLER FROM THE ICONIC NUMBER ONE BESTSELLER. ONE OF THE MUST-READ NOVELS OF THE YEAR.

John Rebus had been in court plenty of times, but this was his first time in the dock…

John Rebus stands accused: on trial for a crime that could put him behind bars for the rest of his life. Although it’s not the first time the legendary detective has taken the law into his own hands, it might be the last.

What drove a good man to cross the line? Or have times changed, and the rules with them?

Detective Inspector Siobhan Clarke faces Edinburgh’s most explosive case in years, as a corrupt cop goes missing after claiming to harbour secrets that could sink the city’s police force.

But in this investigation, it seems all roads lead to Rebus – and Clarke’s twin loyalties to the public and the police will be tested to their limit.